Eastbridge is a peaceful picturesque little village about one and a half miles from the coast which combined with nearby Theberton, has a population of around 400 people. The centre of the village is The Eel's Foot, a well-known Adnam's pub said to date back to the 16th century, and historically a popular smugglers haunt. The pub serves morning coffee and pub food lunch time and evenings. A traditional 'squit night' or folk night is held every Thursday – where anyone can bring along an instrument, sing or even clog dance! You can also hire bikes here.

Eastbridge is a popular place with birdwatchers, and most evenings people are out promenading along the road to the bridge and back, watching the very obliging barn owls make their regular appearances. Situated next to Minsmere, many of the reserve's birds and wildlife can be seen from the bridge and around the village, including marsh harriers, bitterns, owls, deer, otters, water voles – even a glossy ibis was present for much of this summer! 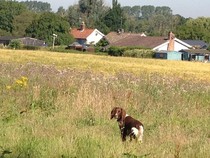 There are lovely walks from the cottages, in all directions. The Minsmere reserve and visitors centre is an easy, level walk (about half a mile to the reserve, a mile and a half to the visitors centre). A path behind the Eel's Foot takes you down to the sea (about thirty minutes walk); from here you can walk north along the coast path to the coastguard cottages on Dunwich Heath, and beyond, or go south towards Sizewell, Thorpeness and Aldeburgh. There are woodland walks, paths through farmland and over heaths, coastal walks and lots of tiny lanes to explore; all the maps and instructions you need are provided in the cottage.

The myriad of pretty little quiet lanes makes this an ideal cycling area – you can bring your own bike, and store it in our secure shed, or hire one for a day or the whole week (details in the cottage info pack).

View the location of the cottages

8th July 2020 - Suffolk Community Barn Owl Project came to check on the nest box today.  We were delighted to discover there are 3 chicks in there - 44, 42 and 36/37 days old.  We took the opportunity to clean and straighten the camera so we've got a better view of whats going on inside the box now

The Barn Owls stayed in the nest box throughout winter and produced a clutch of eggs this spring.  Unfortunately, the camera got knocked out of position so we couldn't see the eggs or chicks very clearly. At the moment there are two healthy looking chicks in the box, who we hope to see fledging in the next few weeks.  If we manage to get any decent photos, we'll post them on the news page and Twitter.